Music can make or break an event. Kevin McCarthy has made it his career providing music and entertainment for events with a fun, unique, professional approach to live music.

Kevin is an award-winning, full-time, professional singer, guitar player, and entertainer from Western New York. This has been his career for over 20 years. He has over 34 years experience performing all types of events! Kevin is fully insured and has been a member of the National Association of Mobile Entertainers for the last 12 years. He is one of the most sought after entertainers, not only Western New York but throughout the United Sates, having performed in 7 states since last June 2015. He performed for huge concerts to small parties and just about everything in between. He can make any event a party and has been called the ultimate one-man band!

Kevin is an experienced and seasoned entertainer with a dynamic show! He plays acoustic guitar, has a pleasant singing voice, and uses backing tracks for a full band sound. He has an extensive catalog of songs, enjoys taking requests, and can make any event a party. One of his biggest assets is his huge variety of songs he can play. He’s has a crowd pleasing show that gets everyone involved, requesting songs, singing-along, dancing, and having fun. Most of his backing tracks he has recorded in his studio with some of the top musicians in WNY and are recorded for the live setting. He sounds like a full band because his tracks are recorded by real musicians! He also has a complete, computerized DJ setup as well with a huge song selection for continuous music throughout the entire event.

The main reasons – Kevin is much less expensive than a party band, has a much bigger selection than most bands (more than 10x the songs), and has full volume control -(full bands often have to be as loud as their drummer so volume control is difficult. When asked to play quieter most bands lose their excitement and energy! ,Plus, Kevin can fit into much small spaces if space in an issue.

The advantage over a DJ is Kevin can provide both LIVE and DJ music! This combination is VERY rare – so it automatically sets your event apart and it gives him a lot of flexibility for all types of situations, events, and crowds. Kevin can easily switch back and forth from performing live to DJing for continuous music for any event. Having live music creates a much more of fun type of party vibe and dancing and Kevin show can elevate any situation and create more excitement with his show and his ability to play a huge variety of songs! Please see below for more information!

What sets Kevin apart is that he produces & records his own backing tracks with real musicians – with some of the top players in WNY. There are professional, dynamic players on these tracks – the best the WNY area has to offer!  – Including drummers Tom Brown, Kirk Beers, Paul Campanella. Ted Reinhardt, Bassist – Jim Wynn among others! Kevin produces the tracks, records them in his studio, and also performs guitar, keyboards, and some bass on the tracks.

They are recorded with the live performance in mind and many people really like Kevin’s “live” versions of the songs. At his show, Kevin plays along with these tracks…close your eyes and its a full band! Most all of Kevin’s tracks are his own “live feel” version of the songs he performs. (Did you know? – Most of the top touring international acts actually use some sort of backing track at their concerts depending on many factors – so the use of backing tracks is popular on many levels of live performance).

There are many benefits to using backing tracks. One of the biggest is volume control. With full live bands, drums usually dictate the volume of the bands, since they do not have a volume control button. Playing quieter usually means less energy and a less exciting performance. With Kevin’s setup, there is full volume control and this is beneficial for many different events.

Another benefit to using backing tracks is the fact that Kevin can play a much bigger variety of songs than bands. In fact, he can sound like many different bands in one night. Thanks to technology, these days musical taste are more wide-spread & diverse than ever! People have many different genres on their IPODs & computers. Being able to satisfy many different age groups & musical tastes in one show puts Kevin above other live acts. 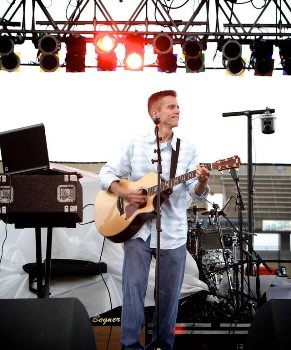 OMG, Kevin, THANK YOU! You rocked that party and we can’t wait to have you back!

“You were absolutely wonderful! Thank you for contributing to making our day unforgettable! We will definitely be coming to see you!”

“Thank you so much!! We had SO many compliments about you. You were amazing, people are still talking about it “how you rapped, etc”…
We hope you had a good time also, it was the best day of our lives. Thank you so much for being so accommodating & reading the crowd! “

“Thank you so very much Kevin!!! Everyone loved the music and you did a wonderful job! We are so pleased the way things turned out. We hope to see you in the future as well! Stay well! Sincerely the Newly weds,”

"Kevin is a fantastic guy and entertainer that plays an awesome array of songs that will please ANY crowd. If you are looking for a GREAT musical ENTERTAINER then do like I did and book Kevin for you next event, no matter what it is.

The crowd at my event was dancing, singing and having a great time all because of Kevin!"